Operational and Data Integrity Risks of IoT for SMBs

The continued rise in Internet of Things (IoT) connected devices has brought about many security challenges for many businesses. Unfortunately, as manufacturers compete in a race to bring their IoT devices to market, most fail to include even the most basic security controls necessary to protect their networks or the data they collect or transmit.  As a result, businesses of all industries are incredibly vulnerable to various security risks and cyber threats.

Suppose your business has adopted IoT devices or has imminent plans to do so. When connecting IoT devices to your network, you need to consider five significant security risks to maintain your IT operations and sensitive assets successfully.

Timely patching is crucial for all internet-connected devices. Unfortunately, most IoT (Internet of Things) devices available today cannot be patched with security updates – leaving them exposed indefinitely to risks that only increase over time. In addition, most IoT device manufacturers do not bother with modern update mechanisms; meaning, some IoT devices function on unsupported legacy operating systems, making them impossible to patch.

IoT’s pervasive utilization of rudimentary Operational Technology (OT) systems lacking in built-in chokepoint filters is essential to prevent or mitigate the spread of destructive malware effectively. But, unfortunately, it serves as an unprotected “backdoor” for hackers to infiltrate business systems and steal sensitive data or extort money.

It is rare for IoT technology to contain even the most basic encryption systems included during manufacturing. The lack of encryption controls leaves all data transmitted in connection with IoT devices wholly unprotected.  Non-compliance often results in operational disruptions and devastating reputational damage.

IoT devices are purpose-built to house sensors that collect, store, and share direct and indirect communications or data interconnected with the devices. As a result, you must consider the high probability that your business’ sensitive or proprietary information could be accessed or exposed without your knowledge or permission. Currently, IoT product manufacturers have no universal standards or global regulations to comply with when it comes to explicit security or data privacy controls required for production. Without universal standards or accountability via enforcement, it’s easy to understand how IoT devices generate increased risks and threats to IT security and data protection.

Now take a moment to imagine the terrifying possibility of how a lack of global requirements for IoT technology could ultimately be responsible for killing people. Without total control over the security of IoT devices, the devices become incredibly vulnerable to hacking and corruption. For example, suppose medical IoT devices such as pacemakers, blood pressure monitors, or continuous insulin regulators were to malfunction or fail due to a security breach. In that case, this could create a life-threatening situation.

Many IoT devices come with weak default passwords that cybercriminals can easily crack. While these can be changed once connected to a network,  often people ignore or neglect to change passwords, leaving devices vulnerable.

IoT ecosystems are very complex, making it highly difficult for businesses to manage IoT security with a single solution. Due to vast and diverse data types and computing powers across all IoT devices, a “one size fits all” security solution is unrealistic. Also, there is a general lack of understanding and awareness of IoT security risks at the end-user level. Therefore, businesses need to be aware of the different IoT security threats to implement security policies.

Primary threats that IT must address while deploying IoT devices in their networks are:

A denial-of-service (DOS) attack is an attempt by a cybercriminal to incapacitate a network with an excessive surplus of the kind of activity that the network usually handles. Since IoT devices lack filtering chokepoints such as firewalls, malware can spread quickly, allowing hackers to enter the network with one IoT device.

Passive wiretapping or eavesdropping involves the theft of information transmitted over the network by the IoT device.

Hackers can then take over the entire network by tricking a web application to allow authentication without a valid password or by adding and deleting users and changing their permission levels.

Wardriving involves the act of searching unsecured Wi-Fi networks by a hacker in a moving vehicle and then potentially gaining access to them. Unsecured IoT devices and default admin passwords on a network are easily discoverable for this kind of attack.

IoT devices are honeypots for zero-day exploits. Zero-day vulnerabilities are vulnerabilities that are left unmitigated and exploited before patches are released. Working remotely from home and using personal Wi-Fi and interconnected devices, IoT devices can be a risk for a company’s IT environment.

How to Overcome IoT Security Challenges

Many SMBs usually struggle with budget and skill constraints to fully and consistently implement and manage IT security. Partnering with an experienced Managed Service provider specializing in IT, data security,  and effective cybersecurity strategy can help simplify your success.

By conducting risk assessments, you will be able to identify vulnerabilities and potential security gaps.

The deployment of advanced security tools and procedures that protect IoT devices from infiltration such, as automate patch management, implement two-factor authentication, enable compliance with security policies, and monitor backups to bolster security.

Learn how to recognize phishing emails and avoid opening emails from untrusted sources.

Contact us to learn more about how to mitigate operational data integrity risks associated with IoT. 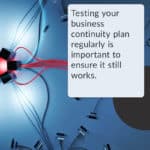 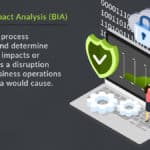 What is the benefit of a Business Impact Analysis?Blog
Call Us Now